With the recent surge in the popularity of tattoos, and the advancements in tattoo artistry, there are many reasons why a person with an existing tattoo may want to have it removed. An upcoming wedding? Employment opportunities? Perhaps simply to clear the canvas for better artwork? Whatever the reason, if you have a tattoo that just isn’t you and you want it off, there is good news.

Removing tattoos just got faster with Picosure...The FASTEST  tattoo removal in the world!

HOW DOES TATTOO REMOVAL WORK?

The ink used in tattoos is made from minerals. To understand how tattoo removal works, think of the ink as tiny “rocks.” Traditional lasers used for tattoo removal are called Q-Switches. These nanosecond lasers predominantly rely on photothermal action and deliver heat into the pigment and surrounding tissue.  With multiple treatments, the “rocks” are broken down into smaller and smaller “pebbles.” Many treatments are required to slowly clear the ink and total clearance is rarely possible. 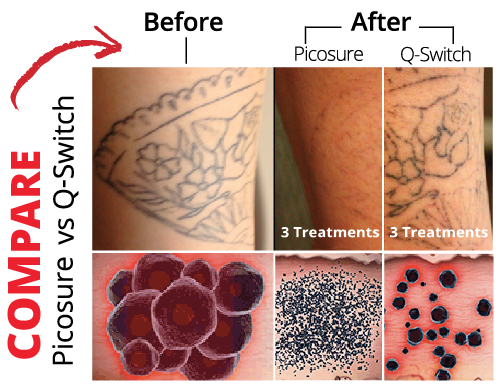 Picosure operates at speeds measured in trillionths of a second. It uses pressure-wave technology that creates an intense mechanical impact that shatters the ink into tiny particles. The “rocks” are not reduced to “pebbles,” but instead become “sand.” These tiny ink particles are easily eliminated from the body. Tattoos are cleared in fewer treatments, with less energy and without injuring the surrounding skin.

The Picosure laser is effective on previously treated tattoos that failed to clear and even stubborn inks can be removed with fewer treatments. Tattoos can be cleared in 1/2 to 1/3 of the time as traditional lasers and with less discomfort.

WHY SETTLE FOR SLOW?

Tattoos are cleared in fewer treatments, with less fluency, and without injuring the surrounding skin. Another indication for Picosure is scar revision. Thus, it has proven effective at removing previously treated tattoos that became impacted in scar tissue and failed to clear after multiple Q-switch treatments. Healing time after a Picosure treatment is similar to that of traditional lasers but far fewer treatments are required. Greens and blues, which are notoriously difficult to remove with Q-Switch lasers, come off easily with Picosure. We have witnessed complete clearance of green and light blue ink in 1 to 3 treatments. Black, dark blue and other colours fade more slowly and may require 3 to 5 (occasionally more) treatments. Red and white will fade much slower than other colours. The pigment will diminish gradually over a period of 6-8 weeks. Treatment may then be repeated.

TATTOO COVER-UPS? To fade or not to fade...

Tattoo shows such as Tattoo Nightmares and Ink Masters give people a false impression that tattoos can easily be covered up with other tattoos. Finding an artist with the confidence and skill to cover up something like large black tribal with a beautiful modern image is rare. Trying to cover any tattoo limits the possibilities for new art because you have to work around the tattoo you already have. Fading the old tattoo first with a few Picosure treatments allows you to clear the canvas and truly create something that reflects your personality and tastes.  For those who cover up without fading first, more often than not what is created is worse than what they started with. The words I hear often are “It looks like a big blob.”  To add insult to injury, the fresh thick ink of a cover-up is far more difficult to remove than the old, faded ink they covered, would have been.

How much does laser tattoo removal cost? Schedule a free consultation/assessment

The cost for a Picosure treatment is higher per square inch of ink than that of traditional lasers, but the total cost to remove the tattoo will be lower. Fewer treatments, faster recovery time and greater results are achievable. Picosure delivers faster and better clearance at a lower overall cost! Give us a call for a free tattoo assessment!